Posted on November 15, 2019 by Arsenio Franklin 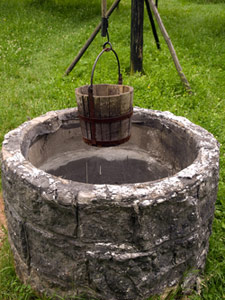 A severe famine struck the land, so Isaac moved to Gerar, where Abimelech, king of the Philistines, lived.
God appeared and told him, “Don’t go to Egypt, stay in Gerar. I will bless you and give this land to your descendants, just as I promised your father, Abraham.
As was the family custom, Isaac told the men of Gerar that Rebekah was his sister. But Abimilech looked out his window and saw Isaac caressing her.
He immediately called for Isaac and said “She is obviously your wife! Why did you tell me she is your sister?”
“Because I was afraid someone would kill me for her!”

“How could you do this to us? One of my people might have slept with your wife, and you would have made us guilty of great sin.”

Then Abimelech made a proclamation: “Anyone who touches this man or his wife will be put to death!”

God blessed Isaac with more grain than he planted. He became rich and acquired so many sheep, goats, cattle and servants that the Philistines became jealous. So they filled up his wells with dirt. The wells Abraham’s servants had dug.
Finally, Abimelech ordered Isaac to leave because he had become too powerful.
So Isaac moved to the Gerar Valley and reopened the wells Abraham had dug there.
Isaac’s servants dug and discovered a fresh water well. But the shepherds from Gerar claimed the spring. They argued with Isaac’s herdsmen, so Isaac named it Esek, meaning “argument.”

One day Abimelech came with his advisor, Ahuzzath, and his army commander, Phicol. “Why are you here?” Isaac asked. “You obviously hate me.”
Abimelech said “If you can’t beat them, join them. God obviously blesses you. Let’s make a covenant. Swear you won’t harm us, just as we have never harmed you. We sent you away in peace, and look how the Lord has blessed you!”
So Isaac prepared a feast and they promised to leave each other alone.
Another well was dug, water was found, the end.
P.S., Esau married two Hittite women and they made life miserable for Isaac and Rebekah.